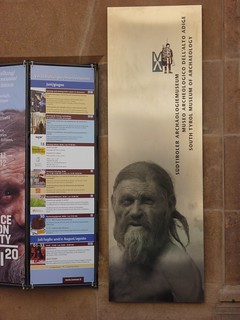 In 1991, two hikers in Switzerland happened upon a great scientific discovery. The two hikers found the incredibly well-preserved body of a Neolithic male frozen in ice.

It’s common enough to find artifacts, pottery, weapons, or maybe even bones, but a preserved “wet mummy” is an entirely different thing altogether.

Imagine for a moment, the immense amount of data one could extrapolate from this specimen. Just short of hopping in a time machine, there would be no better way to study Neolithic human biology than this.

Naturally, numerous scientific studies have been performed during the last 20 years on “Ötzi,” the nickname given to the mummy. But until recently, the teeth were barely examined.

Apparently, it was hard out there for Ötzi, dentally speaking, as he suffered from some damage to his teeth and jaws. Its theorized the damage was most likely caused by some sort of accident.

In addition to that, one front tooth was chipped and one molar had lost a cusp, possibly from chewing on something, perhaps a small stone in some cereal porridge. At that period of time agriculture was on the rise, and that meant Ötzi’s diet could have consisted of a lot of grain and rough hard food. This did, however, work in his favor a bit as the abrasive texture of his food most likely served as his only means of cleaning his teeth. However, the extra starch in his diet did contribute to a significant amount of tooth decay.

Lastly, it appears Ötzi suffered from advanced periodontitis, so it’s likely he was in a lot of pain, quite often. This discovery has given science a plethora of insights into the diet and even the harsh quality of life in the Neolithic period, and may offer even more knowledge as studies continue.

Ötzi could have benefited from regular examinations and cleanings from a general dentist like Dr. Andrew Hall. If you haven’t been to the dentist in a while, book an appointment today!