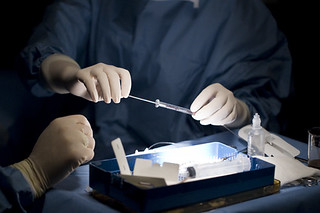 Researchers at King’s College, London, have recently done something straight from a science fiction novel. The researchers have mixed cells from human adult gum tissue with tooth-inducing cells from mouse embryos to grow new teeth, complete with a root system.

This amazing scientific feat may one day make dentures and dental implants a thing of the past. According to researchers, the method remains a long way off from clinical use but the results are very promising.

Normal teeth are developed in infants when embryonic cells in the mouth combine with mesenchymal cells derived from the neural crest. Basically it’s the start button for generating teeth. The goal of these researchers is to produce immature teeth, or tooth primordia, in the form of “cell pellets” which can be implanted into an adult jaw where they develop into normal, functioning teeth.

According to Paul Sharpe, an expert in craniofacial development and stem cell biology at King’s College, “Epithelial cells derived from adult human gum tissue are capable of responding to tooth inducing signals from embryonic tooth mesenchyme in an appropriate way to contribute to tooth crown and root formation and give rise to relevant differentiated cell types, following in vitro culture.”

But the challenge for researchers was to find a non-embryonic source for the cells. It wasn’t until researchers extracted cells from humans and mixed them with embryonic mesenchymal tooth cells derived from mice that progress was made. After a week’s time, the scientists transplanted the cell mixture into the protective tissue around the kidney’s of living mice. The result was that some of the cells developed into a hybrid of human-mouse teeth complete with roots.

The challenge now is to find a way to make the cells induce new teeth in a human. When, or if, they do, a huge advancement in tooth replacement will be achieved. Until then, be sure to consult Dr. Hall about tooth replacement. He can help assess your needs and determine if dental implants are right for you.